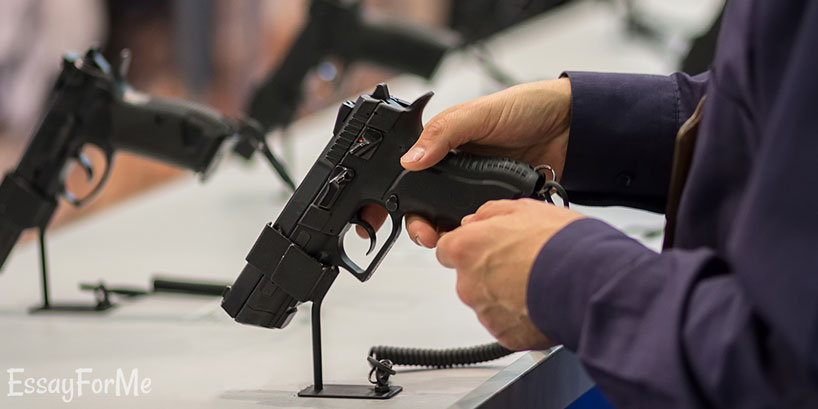 Americans often pride themselves in owning guns. However, in recent years gun violence has escalated and caused many deaths ranging from mass shootings in school (like in Columbine, Ohio) to the more isolated cases of unjustified suspicion (like with the shooting of Trayvon Martin).

There is an abundance of arguments for and against gun control. In this article I will argue for gun control, as this is the opinion I hold close to my heart.

Of course, you would want to grip your reader’s attention from the very first sentences. For instance, you can start by mentioning an interesting fact in regards to your topic. Did you know that the US has the most guns per person that any other country in the world? The second one is Yemen, which only holds half as many guns per individual as the US does.

Apart from the hook, you need to state a clear thesis which would prepare the reader for what’s coming in the body paragraphs. The main rule here is not to use a mere fact as your thesis. It has to be something which was not proven by scientists – something that needs to be argued. Moreover, you need to use clear language here. There should be no rhetoric, but confidence and conviction.

For instance, the statement that the US must impose stricter regulations on gun owners is not something universally accepted (although I wish it was). So, it can serve as a good thesis. However, do not get carried away and include multiple evidence in the introductory paragraph. Remember, this is not its purpose. Introduction is just that – introduction. You can use one or two striking pieces of info to win the reader, but leave the majority of details for the body paragraphs.

It is palpable that argumentative essay on gun control must include arguments in regards to gun violence. Here I would like to lay out the key ideas to employ when advocating for gun control.

First of all, according to the statistics of the UNODC the US has the highest gun deaths’ rate than any other developed country. Its figure nears 30 deaths per 1 million people, while in Sweden it is only 4. It ranks thirty first in the world in terms of gun violence, which is definitely deplorable for a state with such a strong economy and level of life. Thus, arguing that limiting gun control is the same as subjecting thousands of Americans to an untimely death makes sense in the light of statistics.

Secondly, guns don’t stop the violence. There are many pundits who contend that people need guns to protect themselves against the bad guys. However, first of all, in most cases the attacked victims do not have time to take their guns out before getting shot. The assailant is always at the advantage, as he is the one with the raised gun. Second of all, not everybody in the US owns a gun in general. According to the statistics in 2010 only 1 in 3 men and 1 in 10 women possessed a weapon. Thus, the system puts the people who opted out of gun ownership at an imminent danger.

It is especially threatening to those people as since the 1980s people are allowed to carry hidden guns to protect themselves. However, they barely had any background checks before being handed a gun. Thus, nobody can be secure when going to a movie or a concert, as those nearby can lose their minds and kill everybody around.

One of the most cited and powerful case the gun control opposition utilizes is the second amendment of the Constitution. However, even though most people consider the Bill of Rights to be sacred and indisputable, it is quite easy to confront this argument.

First of all, the second amendment was written in the 18th century when guns were not as advanced, so one could fire only one bullet at a time. They were far from being the killer machines they are today. Secondly, the supermarkets were not as widespread so people had to hunt rather than shop. So, they need guns for the mere purpose of survival. Thirdly, at that time the country was still in the process of formation, so it was necessary for people to ensure that they could fight against the undemocratic government. Nowadays the president is the one with control over nuclear weapons, so even the best-shooting gun is not likely to stop him.

Ask yourself a question, does it really make sense to uphold all the laws that were ever adopted? At one point, a black American was accepted as 3/5 of a person. Should we still believe that just because it was in the US Constitution of 1787? It is always helpful to draw parallels like this in defense of your argument. Of course, your opponent may say that this is not the same, but the idea is undeniably resonant.

There are many other arguments used by pro-gun activists to justify their position. First of all, they may mention that it is not the guns, but the people who pull the trigger. However, if these are the people, shouldn’t they be prevented from having a gun? Nobody states that guns have a conscious mind to shoot. However, when put in the hands of a wrong person, they can become a truly malicious force.

Many would shift blame to bad mental health institutions. It is true that there are severe problems in this sphere. However, this is just a deflection, not a valid argument. It is obvious that if a person commits a mass shooting, there usually is a mental health issue involved. However, it is not always the case. Often it is simply racism and inability to see a person behind the skin color like in case of the aforementioned Trayton Martin or Philando Castile or many other unknown people who were shot because of prejudice rather than any wrongdoing.

Mass shootings are usually perceived as more tragic than a single person death, but they are just one side of the problem. It is important to reform the mental institutions, but they are not likely to stop all gun crime, as it is not always a result of a psychological issue. Moreover, in most cases it is impossible to foresee when a person, who is mentally ill, commits something heinous. Even if they go see a specialist on a regular basis, a human mind is still a mystery, and something seemingly minor can disrupt their overall world perception in a matter of seconds.

In the conclusion you will need to restate your thesis one more time and summarize the most striking points which support your case. It is important not to mention any new ideas, as those will only confuse the reader, instead of giving them a perspective.

Gun control is definitely a burning issue for the American public. There is much political divide, with the Republican Party generally leaning towards the pro-gun lobby, and the Democrats rallying against. The same can be said about the American population. It is the old white men living in the country, who normally stand up for gun ownership, while the younger people living in the cities tend to oppose it.

For me, gun control is not even a question. The overwhelming evidence speaks in favor of it, so, it is just a matter of time before stricter laws are enforced.