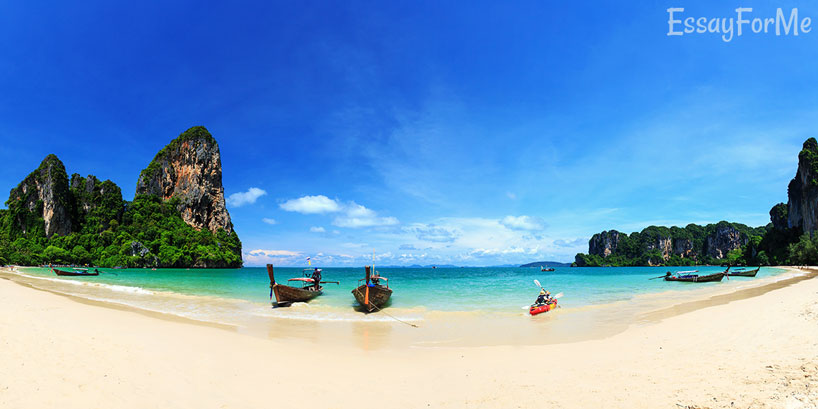 It is a modern book, so there won’t be a lot of information available on the Internet. Therefore, I would recommend you actually reading the book and developing your own ideas about it. However, hopefully, this small review will set you on the right track.

So, the book’s setting is quite simple: the backpacker by the name of Richard is tired of the typical touristy destinations and wants to find an isolated spot of pristine nature not smeared by civilization. He succeeds in his endeavors, but things do not quite go according to the plan. Here are some key ideas to touch upon in your review.

It is critical that you have a clear understanding of the book’s plot. I will not give away all the details not to spoil the read for you. In any case, if you are feeling lazy, there is a plot overview on Wikipedia. Here I would like to draw your attention to the most significant plot twists and what they mean in terms of the book’s main ideas.

First of all, Richard, who is the main hero and the narrator of the book, gets hold of a secret map which should lead him to a virgin island. He cheerfully embarks on a journey, with a lovely French couple joining him along the way.

However, it does not turn out to be as easy as the tourists are used to, with many obstacles every now and then. For instance, they have to give up their morality by bribing the boat owner, and then risk their lives by swimming in unexplored waters and jumping from the waterfall, escaping right in time not to get shot by the drug lords. It all sounds pretty exciting, but it also holds a philosophical meaning, with obstacles representing a life full of struggle and the ultimate destination – the beach, being a paradise.

Despite the ostensible victory, things go awry quite soon. Even though the community accepts the wanderers, and they smoothly integrate into its daily routine, the seeming idyll soon reveals its true colors. There is no unity between its members, only a constant fear of being found or breaking a flimsy peace with dangerous cannabis growing neighbors.

Those are most important for the book review. You need to expound upon as many themes as you can find, as it shows that you can read between the lines and understand how all the exciting action-fused events depict the philosophical canvas of the book.

So, the most obvious theme is, definitely, escapism. Escapism relays the desire of people to, well, escape the boring reality and plunge into the unknown and the unexplored. Many view this phenomenon negative, as some can become addicted to the imaginative world to the detriment of their real lives. However, the authors usually portray this idea in a more positive light, as a person that escapes usually finds what their heart desires.

In case of Alex Garland’s book, we have a guy who, after travelling extensively, wants to discover that very place, which cannot be accessed by mainstream tourists. He is fatigued by the hustle and bustle of Bangkok dreaming about white untouched sand and euphoric silence. However, his escapism proves to be a utopia resulting not only in psychological disorders, but also physical damage. The author shows that once a person steps upon land, it becomes corrupted, and the strife is inevitable.

Here comes the human versus nature dilemma. Richard being a lucky guy finds a piece of Earth which was not violated by the people’s touch. Nonetheless, even though the community is resolved to interfere with the nature as little as possible, they cannot always live at peace with it. Often they have to resort to the outside help, like in the case with the Rice Rush or medications for the wounded. The moral lesson here is that humans and nature cannot always co-exist peacefully together.

Although every personage in the novel is special and deserving of your attention, I would still like to talk more about Richard. From the very beginning of the novel, any modern backpacker or a person who likes travelling would be able to relate to him. He is just a typical guy who is tired of swarming tourist mobs in search of something authentic, unadvertised, and unexplored.

He is not hesitant about finding the secret island. Richard is brave, jumping through deadly hoops to even get to the island, and demonstrating fits of courage there saving and helping other people. However, when faced with the moral choice, he loses vigilance at some point. Richard finds it extremely hard to choose between sticking to the community and sticking to his own humanity. He has to decide what is more important – the well-being of a group or the life of an individual.

Richard is a child of his generation. When he changes his occupation from fishing to guarding the island, he often compares his escapades to video games. He imagines having the number of lives which he loses if he, for instance, makes a loud noise and reveals his whereabouts. Richard often calls the guarded area the DMZ in reference to his favorite movies about the Vietnam War. Despite all these efforts, he remains bored, unable to derive excitement out of his life.

The island mollifies the symptoms for some time, but once Richard realizes how fake his utopia really is, his state worsens. He starts to hallucinate and lose touch with reality, which leads to a desire to escape the escapism.

Even though this book was written like 20 years ago, it is timeless due to its depth and important questions raised. It is true that some cultural references like the DMZ, or the television, or console games would be rather outdated for millennials, but it is not the words, but the meaning behind them that matters.

Alex Garland wrote a book about people’s desire to run away from the routine and find a miraculous haven free from the outside noise. This idea will never die out, unless humans find some other planets to settle. The modern world is shrinking every second, with more people being born and looking for the land to occupy. If the place is pretty, it is doomed to become a victim of the ever-growing tourist industry. People have tamed the planet and now are adamant to reveal all of its secrets.

It is also a book about the influence of community and group thinking on individual’s decisions. Richard on the beginning of the book is different from Richard at its end. Being a part of a community transformed him, often forcing to relinquish his humanity for the common good. People are social creatures, and they cannot exist outside of any kind of social construct. Therefore, it will always be essential for them to understand when the common good ends and the personal responsibility starts.

Finally, it is a book about the eternal search for Eden, which, however, is lost forever for the humanity. It does not matter whether you are religious or not, you probably have thought at least once what the ideal place for living would be. The characters in the Beach tried to restore Heaven on Earth, but they failed not only because of internal rivalries and inability to tame their ego, but also because the world is a very dangerous and unpredictable place. Even being extremely careful, they could not isolate themselves completely.

Just read the book yourself. You will see what I mean.