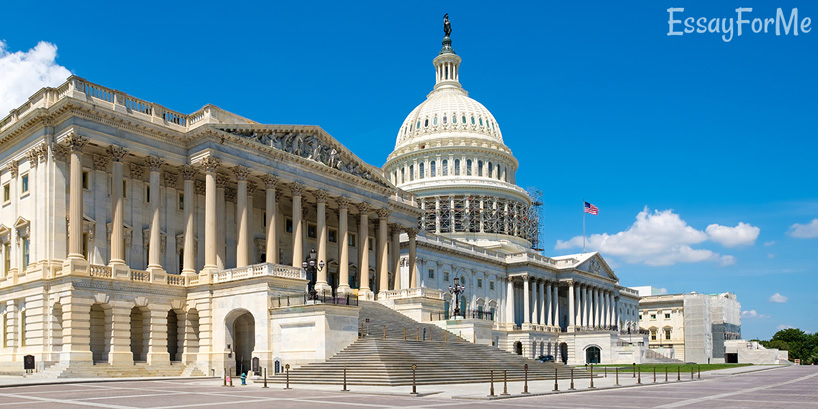 The US president, desperate to arrive at any kind of legislative victory, pushed hard for the Congress to pass this contentious and highly unpopular bill. It is the biggest change in the tax code since 1986 and also one of the worst proposals in the history of the United States by far. The bill disproportionately benefits more affluent people, while giving only temporary breaks for the less privileged layers of society. It is also one of the prime examples of the US government descending into plutocracy.

It is important for every American to study thoroughly and understand the ramifications of this bill. Most likely you will get an assignment to write on it in your Government or History class, as this is a significant development which affects millions of people not only in the US, but also around the globe. The Tax Cut and Jobs Act could inspire other countries to pursue similar policies, because the US is a major player on the world stage which sets tone for the nations all around the planet.

It is easy to be deluded by the title of this piece of legislature, as there is nothing Americans loathe more than taxes. Having fewer of them can definitely be perceived as an achievement. Nonetheless, it is important to look at the entire picture to understand how this plan is just a sham meant to force the poor to pay more and for the rich to give less. This is a reversed Robin Hood for you. Although not many things are as black and white, this plan definitely creates a new shade of evil in the political play.

I would like to start by stressing how unpopular the bill really is. 55 % of Americans according to the recent poll results oppose its adoption, with only 33 % standing up for the proposal. The president’s approval rating hit the historical low of 33 % as well, so you might guess where this support comes from, which is quite deplorable. None of the US presidents had such a measly endorsement during their time in office. Trump only exacerbated the situation with this unjust and simply awful bill.

The main feature of this proposal is that its perks are temporary for the lower and middle class individuals and permanent for the corporations. Basically, the tax cuts which ordinary Americans will enjoy are to expire in 2027. From that time on most people will see their government payments increase while businesses are not going to face the same transition. It is also notable that, although taxes will be cut for all quintiles, the top 1 % and 0.1 % are going to have the most massive reductions.

The underlying idea is that businesses having to contribute fewer taxes are going to expand, thus, augmenting the economic growth and creating new jobs. However, not many economists buttress this optimistic prognosis, as even when asked, the CEOs of major corporations suggest they would rather use that money to please investors and shareholders. Thus, the US government is either lying to its people or being remarkably naive trusting businesses to care about the society rather than their own profits.

It is also expected that the new bill is going to undermine the Obama era achievements in providing medical care for all. Basically, according to the plan, the penalties for not having insurance are going to be removed. These fines, although criticized by many as an infringement on people’s rights, proved to be a potent incentive for Americans to go get medical coverage. However, after this punishment is lifted, it is predicted that many would opt out of the mandatory insurance.

The US government is still going to assist the disadvantaged with premiums coverage, and Obamacare is not to be technically banned. However, it is doubtful whether people will carve out time from their busy schedules to get insured, if there is no stick-kind of policy to force them to do it. Hopefully, Americans are smart and reasonable enough not to fall into the trap set for them by their own policymakers. The worst part if that the GOP actually hopes to save money off the uninsured people.

Some anticipate that by 2019 there will be about 4 million uninsured residents, while by 2027 this number will skyrocket up to 13 million. The premiums are to become higher by 10 %, which, of course, is going to make it more difficult for ordinary folks to procure money for medical coverage. You probably remember the GOP healthcare bill which died in the Congress just recently. This is a roundabout way for a Republican party to hurt Obama legacy and make up for the initial failure.

Why Is It Good for Trump?

Despite Trump’s remarks that this bill was not good for him personally, judging from its content it does not seem so. First of all, there was a last-time provision added before the Senate vote which decreased the taxes for real estate owners (cue Trump with over 300 houses in property). This change is also advantageous for the majority of the US senators, which swayed many of them in favor of the proposal. This is an extremely alarming sign for the American people.

Moreover, it allows for inheritance up to 11 million dollars to be transferred untaxed. According to the current law, this sum is 5 million, but Trump decided it was unfair for those individuals who earned a lot of money in their lifetime and simply want their kids to have it after their death (cue Trump with his big family).

In addition, the first four quintiles are to get a tax break on the average of 1000 dollars. It may seem like a nice deal, until you look at how much the upper 3 layers receive. The average reduction for the top 1 % equals to 50, 000 dollars, while for the 0.1 % it is 200, 000 $. It was estimated that 92 % of all cuts are going to 0.1 % of US population in terms of income. Although nobody had a chance to peek at Trump’s tax returns just yet, it is fair to assume that he is most likely the one in the upper class, judging by his ostentatious houses and expensive hobbies.

This plan marks the decline of the Republican Party, as this is a blatant move which only creates an illusion of helping the ordinary people, with most benefits going to the legislatures and their friends. Moreover, even the measly cuts intended for the lower classes, are only temporary, while the enormous reductions for corporations (from 35 to 21 %) are going to stay in place for eternity. There is no denying the fact that this is a very disgraceful move on the part of the GOP which is bound to disappoint their voters.

The whole process of bill adoption was reckless and haphazard. It is enough to mention that legislatures only got it hours before the first vote. The Democrats protested it vehemently, but it did not help much with the majority of Republicans in both Houses. However, the fact that this widely celebrated proposal is so unpopular with the majority of Americans and how in general unproductive this year has been for the president and his party sends a message that something needs to be changed. Otherwise, the Republicans will find it very hard to restore the trust of their voters and win the next midterm election.